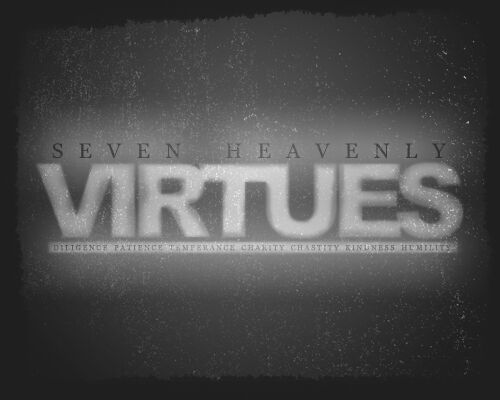 The heavenly virtues are embodied through the archangels Gabriel, Michael, Ramiel, Uriel, Raguel, Saraquel and Raphael; according to Chapter 20 of the Book of Enoch. They are the opposite of the 7 Deadly Sins.

"Gabriel is the archangel that guides souls, not only to the gates of heaven after death, but also onto the path of good in life."

A zealous and careful nature in one's actions and work; decisive work ethic, steadfastness in belief, fortitude, and the capability of not giving up. budgeting one's time; monitoring one's own activities to guard against laziness. Upholding one's convictions at all times, especially when no one else is watching - integrity.

"Michael is the protector of the innocent and will answer to prayers more than any of the other angels. he finds in himself an unfortunate weakness toward the hardship of women."

Love, in the sense of an unlimited loving kindness towards all others, it is said to both glorify and reflect the nature of god. such love is self-sacrificial. generosity, charity, self-sacrifice; the term should not be confused with the more restricted modern use of the word charity to mean benevolent giving.

"Cassiel is the judicatory of the wicked, and punishes them accordingly. he's also a tempter and tests the goodness and virtue of mortals to see if they are truly worthy of being taken by Gabriel in death."

restraint, temperance, justice. constant mindfulness of others and one's surroundings; practicing self-control, abstention, moderation, zero-sum and deferred gratification. prudence to judge between actions with regard to appropriate actions at a given time.

☀the Archangel of Death and Protection

forbearance and endurance through moderation. resolving conflicts and injustice peacefully, as opposed to resorting to violence. creating a sense of peaceful stability and community, rather than engendering suffering, hostility and antagonism.

"Ramiel embodies hope and compassion, and advocates the goodness she sees in every creature - even demons. she is the bleeding heart of heaven, forgiving in her very nature and seemingly unable to anger."

charity, compassion and friendship for its own sake. empathy and trust without prejudice or resentment. unselfish love and voluntary kindness without bias or spite. having positive outlooks and cheerful demeanor; to inspire kindness in others.

"Uriel speaks the truth even when this may hurt, and this may make him come across as a little less good sometime,. he will always be the one to guide you out of the dark with visions of your potential and inner self, whatever this may be."

to be honest with oneself, one's family, one's friends, and to all of humanity. embracing of moral wholesomeness and achieving purity of thought-through education and betterment. the ability to refrain from being distracted and influenced by hostility, temptation or corruption.

"Raphael was once the angel of healing, embodying humility in contrast to Lucifer's pride. some time ago, he shed his wings and chose to live life on earth as a demi-angel. he still has extraordinary healing powers, despite not being a full angel anymore."

humility is not thinking less of yourself, it is thinking of yourself less. a hermeneutic of suspicion toward yourself and charity toward people you disagree with. the courage of the heart necessary to undertake tasks which are difficult, tedious or unglamorous, and to graciously accept the sacrifices involved.

The Seven Virtues opposed the Seven Sins. In one scheme, the Seven Virtues are based on the three spiritual virtues listed by Saint Paul in 1 Corinthians 13:1-13: Faith, Hope and Charity, followed by the four Cardinal or "Pagan" virtues: Prudence, Temperance, Fortitude, and Justice

.In the Catholic catechism, the seven Christian virtues refers to the union of two sets of virtues. The four cardinal virtues, from ancient Greek philosophy, are prudence, justice, temperance (or restraint), and courage (or fortitude). The three theological virtues, from the letters of St. Paul of Tarsus, are faith, hope, and charity (or love). These were adopted by the Church Fathers as the Seven Virtues. https://faithandtheintuitivearts.wordpress.com/2014/08/15/seven-virtues-and-seven-deadly-sins/

Additional Members / Other Virtues (that are of the Holy Trinity [God, Jesus Christ & the Holy Spirit])[]

Community content is available under CC-BY-SA unless otherwise noted.
Advertisement